Sealing a Pilgrimage with Ink

SEALING A PILGRIMAGE WITH INK

Last Fall, Ryan and Wynsdey Adams prepared for their first Holy Land pilgrimage, coordinated and operated by Catholic Travel Centre. As Deacon Sir and Lady Commander, respectively, in the Western USA Lieutenancy of the Knights and Ladies of the Holy Sepulchre, they would walk in the footsteps of Jesus, in the sacred places they had up until then only read about in scripture.

To honor their pilgrimage to the Land of Our Lord in the tradition of the Order, Ryan and Wynsdey would also receive their Pilgrim Shell at the Patriarchate at the Church of the Holy Sepulchre in Old Jerusalem.

In the weeks leading up to their departure, while watching a television program, Wynsdey learned of another, equally personal tradition that piqued her interest: the Jerusalem Cross tattoo. Both she and Ryan, as she says, “are heavily tattooed already,” and this seemed to be a perfect way for them to commemorate their journey in a way that would be with them always.

“As soon as I learned about the Jerusalem Cross tattoo, I knew Ryan and I would have to get ours,” Wynsdey says. “I did some research and found out about a family that had a tradition passed down through generations of tattooing pilgrims for over 700 years, starting with the Coptic Christians.”

As Catholics, the tattoo Wynsdey and Ryan wanted was the Jerusalem Cross, which has a long history in the Christian world. Not only is it the emblem of the Order of the Holy Sepulchre, but the symbolism of the five-fold cross also is variously given as the five wounds of Christ, Christ and the four corners of the world, or Christ and the four gospels.

The cross’s earliest appearances were around the time of the first Crusade (1096), in the coat of arms of the first Latin ruler of Jerusalem. In the nearly one thousand years since then, the Jerusalem Cross has been associated with Christian crusades, heroism, and knights, but especially with Jerusalem and especially when it comes to tattoos. Even Albert, Price of Wales (later King Edward VII) had a Jerusalem Cross tattooed on his arm when he visited Jerusalem in 1862. 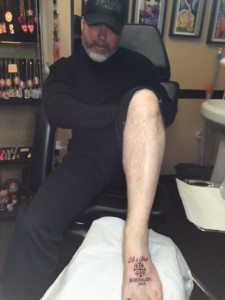 The tattoo on Ryan’s foot is a reminder of his pilgrimage, “walking in the footsteps of Jesus.”

Joy in Numbers
A fellow pilgrim saw the same TV program Wynsdey had seen and was completely on board: “I want to do that, too!” The numbers grew until a half-dozen people from their group of 40 planned to get their Jerusalem Cross tattoo.

Although Wynsdey and Ryan were excited about getting their tattoos while in Jerusalem, unfortunately, the logistics didn’t work in their favor. So they and the others decided to get their tattoos when they got back to the States instead.

“I had mine done on the front of my leg,” Wynsdey explains, “and Ryan got his on the top of his foot. We wanted it to be in a place that represented ‘walking in the footsteps of Jesus.’ It was also important for both of us that the tattoo was where we could easily see it and remember our journey. We also each had our name in Arabic tattooed above the cross, with the year below it.

“It was a really meaningful experience for Ryan and I, and really for everyone who got the tattoo,” she remarks, “having researched and understood the tradition, and believing it was such a beautiful way to remember the experience we had in the Holy Land.” 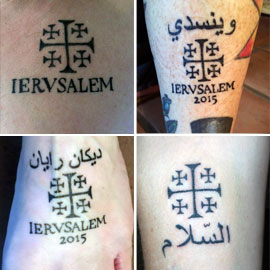 Jerusalem Cross tattoos on pilgrims who traveled in Wynsdey’s group, including one on a Deacon’s chest (top left), Wynsdey’s tattoo on her leg (top right), Ryan’s tattoo (bottom left) and a tattoo with the word “peace” in Arabic below (bottom right).

The couple already plans to return to Jerusalem in 2017, and when they do, they will have that year added to their tattoos to commemorate their return pilgrimage.

“The first time, there is so much to take in,” Wynsdey recalls. “We’re looking forward to going back and going even deeper into the experience when we return.”

Ryan Adams is a Deacon at St. Borromeo Church in North Hollywood, California, and an executive in post-production at CBS. Wynsdey Adams is a Counselor for Adolescent Pediatrics. They are both active members of the Equestrian Order of the Holy Sepulchre (Western USA Lieutenancy), a charitable Catholic organization that supports the needs of the Christian community in the Holy Land.