Home > Blog > Uncategorized > A Pilgrimage of Faith: Reflection on a Marian Pilgrimage

A Pilgrimage of Faith: Reflection on a Marian Pilgrimage

In late September 2015, Fr. Richard Perozich, pastor of Immaculate Conception Catholic Church in San Diego, led a Marian pilgrimage of his parish community to Spain, France and Portugal. Upon his return, he wrote a message to his parishioners, reflecting on the journey. With Fr. Perozich’s permission, we are reprinting his inspiring message as a guest blog.

A PILGRIMAGE OF FAITH

On September 28th, 40 Catholic pilgrims from Immaculate Conception and near San Diego flew to Christian Europe on a pilgrimage of faith in the Most Holy Trinity to experience the many places where heaven touched earth, where Mary appeared to humans to reinforce Jesus’ message of conversion, repentance and salvation. 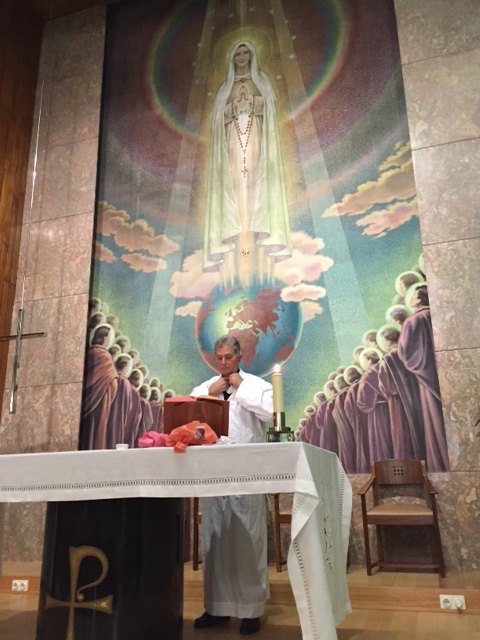 Fr. Richard Perozich celebrating Mass at the Shrine of Our Lady of Fatima.

In Barcelona, we visited the church of Maria del Mar, Mary of the Sea, built in the 13th century by faith filled sailors who carried on their backs stones to construct this church. We celebrated Holy Mass here as we did each day in one of the shrines. Our local guide, Jose, taught us also about the cathedral in Barcelona where we visited, and then to the basilica of the Holy Family designed by Gaudi, begun in the 1800’s and scheduled to be finished by 2017. It was faith filling to be among so many pilgrims at all of these places feeling their faith to augment our own, and showing them our devotion to God and the Blessed Mother.

We travelled to Zaragoza where tradition says that Mary appeared to the apostle James to urge him on when he was becoming discouraged. She appeared to him on a marble pillar telling the apostle to build a church on this site. With countless other pilgrims, including the late Saint John Paul II, we venerated the pillar in the church of Our Lady of the Pilar. We celebrated Holy Mass in one of the chapels of this magnificent church before continuing our tour of the city of Zaragoza and the old cathedra.

From there we traveled over the Pyrenees to Lourdes, France, set in a valley cradled by tree-covered mountains with the river Gave. It was here that Mary appeared to Bernadette Soubirous in 1858, revealing to this uncatechized girl that the name of this mysterious lady was, “I am the Immaculate Conception”, a doctrine just proclaimed ex cathedra by the pope of that time, something that Bernadette could neither know nor understand. Mary asked Bernadette to drink from the spring which the girl found when she dug under the earth at Mary’s direction. That spring now yields copious amounts of water so that sick pilgrims can bathe in the special baths where many documented healings have taken place, and can drink the water as well as take it home for their loved ones who cannot make the pilgrimage.

In Lourdes we participated in the nightly procession of the international candlelight rosary, adoration of the Blessed Sacrament in the underground church with its capacity for 25,000 pilgrims, celebrated Holy Mass at one of the chapels and at the cave where Mary appeared to Bernadette. Our local guide took us to the home and the mill where the Soubirous family lived in poverty after some misfortunes that befell the family. We pilgrims were able to walk the mountain for the stations of the cross, and visit the upper and lower church and the crypt to venerate St. Bernadette’s remains.

After the cool and rain of the Pyrenees, we travelled through San Sebastian, Spain where we concelebrated Mass with a retired bishop from the Bronx, NY in the beautiful cathedral there. After lunch, some of us got our feet wet at the beach of the Bay of Biscay in the waters of the north Atlantic before boarding our Mercedes motor coach once again.

Arriving at Covadonga, Spain where Don Pelayo began the reconquest of Spain from the Moors in the early 700’s, we escaped the hustle of travel, the crush of pilgrims, and were cradled by the beautiful mountains all around us in quiet and peace. We visited the cave of our Lady, paid tribute to Don Pelayo, were soothed by the silence of the mountains, the rainbow in the sky, and lulled by the sound of the waterfall next to the cave. The next morning we celebrated Mass in one of the chapels of the rose-colored stone church with its spires reaching up to the sky. It reminded us of Jesus leaving the crowds to go to the mountain to pray. Most of the pilgrims wished we could have stayed there for a while, just as St. Peter wished when he was on the mountain with Jesus, Moses and Elijah at the transfiguration.

Santiago de Compostela in the Spanish province of Galicia was our next stop. We began with a tour of the city which ended with holy Mass at the Cathedral where thousands of pilgrims actually walk a several hundred mile journey from many directions out of devotion to our Lord. At the end of the Mass, we witnessed the special custom of offering incense to God in the botafumeiro, an 8 foot censor guided by 8 men to swing it from side to side, ceiling to ceiling to cleanse the church and the pilgrims of evil and present them and their prayers to God. After some free time, I found a convent, arriving just in time for the rosary, before joining other pilgrims for sung vespers at still another monastery by the Benedictine nuns.

Bom Jesus in Braga, Portugal was the next stop. Some pilgrims took the funicular to the top, while others of us climbed the 600 steps where the different stations of the cross were displayed in small chapels on the way, and rising further the virtues of faith, hope, and charity, and statues of figures from the old and new testament leading up to the beautiful church where we celebrated Holy Mass at the main altar. Many of us descended the same steps on foot before boarding the coach to the city of Porto, and finally the shrine of Fatima.

The first evening in Fatima, we took part in the international candlelight procession of rosary and Eucharist around the square, which began at the site where Mary appeared to the 3 shepherd children. The next day we celebrated Holy Mass in one of the newer chapels, and then venerated the tombs of the 3 visionaries, Lucia, Jacinta, and Francisco in the large church. Our guide took us to the homes of the children in the nearby village as well.

The final stop in Lisbon brought us to the Romanesque cathedral with a tour of some of the churches and local monuments. We celebrated Holy Mass in the cathedral in the morning. The surprise for us was our vigil Mass Saturday evening in the Portuguese language at the beautiful church of St. Anthony. After Mass, the Franciscan priest brought out a relic of St. Anthony so that we could venerate it. Then we were able to pass through the sacristy to descend to the lower area to the room where St. Anthony was born. In Portugal he is called St. Anthony of Portugal because he was born there, while most of us call him St. Anthony of Padua where he preached for the conversion of many people.

On Sunday morning we boarded our plane to return to San Diego, and like Mary did with Jesus, we continue to treasure and ponder the memories of this holy pilgrimage in our hearts, allowing Jesus to unfold in us all the graces we received in our worship and devotion as pilgrims on the journey toward eternal life.

Copyright © 2002-2023 - GoCatholicTravel.com. All rights reserved. Information in this document is subject to change without notice. Other products and companies referred to herein are trademarks or registered trademarks of their respective companies or mark holders.