Tanya Cangelosi’s life has had more than its fair share of challenges, to say the least. A relative sexually abused her at an early age. Her father placed her in an orphanage, and she was unable to convince the orphanage her mother was still alive. She lived on the streets as a young person and later joined a biker gang.

At age 26, after a suicide attempt, Tanya connected with a Lutheran minister and was taken in by a church family. As her faith grew, Tanya’s life turned in another direction. The family encouraged Tanya to go to college, and she earned her degree. In 2006, she moved to Denver, and began working with the homeless, but not according to any plan. Well, not any plan she had created, but perhaps one of Divine intervention.

A life of service begins 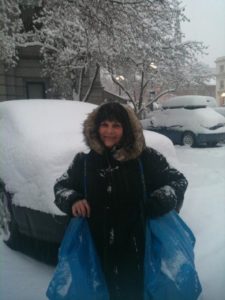 “I would spend afternoons and early evenings sitting on the steps of the Capital, reading a book or just daydreaming,” she recalls.

“I’d say ‘hi’ as people walked by, but more often than not would be ignored. After a few weeks, different people began to join me — one, two and sometimes several at a time. As we talked, I learned these new friends were all homeless. They slept at night on the heat grate alongside the courthouse. As we listened to each others’ stories, I realized we weren’t so different. We all just wanted to be heard.”

Discovering her new friends were often hungry, Tanya, after a full day at work, brought sandwiches to share with them. And so it began.

In 2007, Tanya founded The Denver Homeless Ministry and attained 501c3 nonprofit status in 2011. Why does she do it? Why does she go out on the streets, in the pouring rain or in the freezing cold when, maybe, only one life is touched? 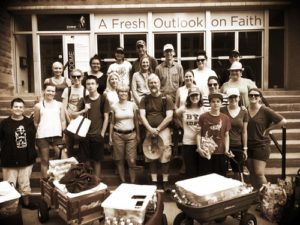 The Denver Homeless Ministry and partners

“Because it’s one life,” Tanya says, and that’s enough. “Mother Teresa said, ‘Never worry about numbers. Help one person at a time, and always start with the person nearest you.’”

The Denver Homeless Ministry website is dedicated to the Immaculate Heart of Mary, to whom Tanya also has a strong devotion.

Message from the Lord in a Dream

In the summer of 2013, Tanya had a dream she was supposed to take a homeless person to Rome. When she awoke, she recalls thinking, if this is from you, Lord, it’s not happening. I’m not kidding, Lord. I don’t do marketing. But if you want to pick somebody, I will help them do it. “And I left the conversation like that,” she says.

But apparently the Lord had a different idea. For six months, Tanya had the same dream. Then one morning, she woke with the thought, I could take Glitterbear to Rome! Glitterbear is the street name for Clarissa, a woman Tanya had come to know through her work with the ministry.

Tanya’s dream became reality, thanks to fundraising efforts through The Denver Homeless Ministry and fellow traveler and chaperone Father Michael O’Loughlin, pastor at Holy Protection of the Mother of God Byzantine Catholic Church. The following year, Tanya and Father Michael took Tree, also known as Derrick, to Rome. In each case, Tanya says, it was the Lord who told her whom to choose.

The Power of Prayer, Faith and Hope

After 14 years on the streets, Clarissa received housing through Colorado Coalition three weeks before her Rome departure. Two days after she returned from Rome, Clarissa gained full custody of her children and has since gotten a job, bought a “mom car,” and has developed a new social circle. Derrick, who was exposed to meth at the age of five by his father, who also used him and abused him, was on the streets at the age of 14. Three months before Derrick departed for Rome, he secured housing.

Tanya knows in her heart she is doing the work of the Lord. “I don’t believe the Lord lays things on our hearts He’s not wanting there,” she reflects. “But we do have to wait on Him and His timing.”

This year, the Lord chose 22-year-old Shyla to travel to Rome. Catholic Travel Centre is pleased to support Shyla’s trip with Tanya and Father Michael. Stay tuned for more on Shyla’s story, as she prepares to depart September 4.

Read more about Tanya’s previous trips to Rome with Clarissa and Derrick and their stories, and learn how you can support The Denver Homeless Ministry.