From Pope to Saint: The Canonization of Blessed John Paul II

It is unofficially official.  The Blessed John Paul II will be canonized on April 27, 2014.  Earlier this month, the National Catholic Register reported Pope Francis let it be known that the much beloved Polish pontiff, who led our Roman Catholic Church from 1978 to 2005, would be made a saint on the Sunday following Easter 2014. 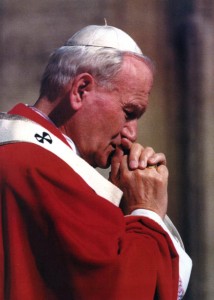 The Path to Sainthood

The first miracle, which occurred just months after John Paul died, was the healing of a French nun, Sister Marie Simon-Pierre, who suffered from Parkinson’s disease since 2001. The second miracle involved a Costa Rican woman who was cured in May 2011 of a cerebral aneurism after her family prayed to a shrine of John Paul on her behalf.

A Canonization Pilgrimage
While we all await the official-official announcement of the canonization date from the Vatican on September 30, we at Catholic Travel Centre are ready!  For those interested in leading a group on a canonization pilgrimage, we have airline and hotel space reserved for the “rumored” date.

The canonization of the Blessed John Paul II has been awaited by Catholics for years. He is an epochal figure for our time, and his canonization promises to be an event of the decade.  If you’d like to join us on a momentous canonization pilgrimage, simply call or email us. We can be reached at (800) 553-5233 and Groups@GoCatholicTravel.com.

This entry was posted in Uncategorized. Bookmark the permalink.