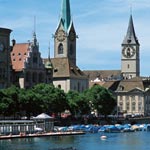 DAY 2: ARRIVE ZURICH / TRANSFER TO LUCERNE
Upon arrival in Zurich, we meet our Catholic Travel Centre representative and transfer to our hotel in Lucerne for our dinner and overnight. (D)

DAY 3: LUCERNE: VISIT OF THE AREA
This morning we begin with Mass at a local church. We will then enjoy a sightseeing tour of medieval Lucerne, with its historic and picturesque old houses, churches, world-famous wooden bridges, towers, fountains and narrow streets. We will see Spreuer Bridge, Chapel Bridge, the Lion monument, Town Hall and the medieval walls. This afternoon we take a cruise on the lake. The lake winds its way for 24 miles into the Alpine ranges in the heart of Switzerland. A scenic cable car ride to one of the area’s summits offers us a breath-taking view of the area. Dinner is on your own this evening. (B)

DAY 4: LUCERNE: EXCURSION TO EINSEIDELN AND ZURICH
Today we make an excursion to the Benedictine Monastery of Einseideln (the name derives from the Einsiedler, or hermits). Among these was the famous Meinrad who, in the early 9th century, retired to the forest with a little statue of the Madonna, given to him by a local abbess. Meinrad was killed by robbers who were then eventually brought to justice for their crime. Since the early 10th century, Einsiedeln has remained a place of fervent pilgrimage. We celebrate Mass at the Monastery, which is situated amidst green pastures and dense forests with some of the country’s most beautiful scenery.

We depart Einseideln and make our way to the city of Zurich, where our city sightseeing tour includes a visit to Fraumunster Church to see the Chagall windows. We also visit St. Peter and Paul’s Church and then enjoy a walk along the Bahnhofstrasse, often called the most beautiful shopping street in the world. We return to Lucerne to the comfort of our hotel for dinner on our own. (B)

DAY 5: LUCERNE / STRASBOURG / TRIER
This morning we depart Lucerne for the town of Strasbourg. Strasbourg is the home of the European Council, the European Parliament and the University of Strasbourg. Many notable university students have been great figures in history, among them Goethe, Napoleon and Pasteur.
We begin with Mass at the Strasbourg Cathedral, followed by a walking tour of the town, known for inspiring Goethe in his poetry, the Astronomical Clock and its daily procession of mythological characters, among those being Apollo and Jupiter. This afternoon we board our motor coach for our drive to Trier, the first major city of the Mosel Valley. Dinner is at our hotel in Trier. (B, D)

DAY 6: TRIER / LUXEMBOURG / COLOGNE / MAASTRICHT
This morning we depart Trier for Luxembourg, often called the ‘Gibraltar of the North’. Luxembourg City is an attractive mixture of the remains of Europe’s past. We will celebrate Mass at the Cathedral of Notre Dame and have a little time on our own before continuing to Cologne. In Cologne, we visit the Cathedral, traditionally housing the remains of the Three Magi in its most magnificent cathedral. We arrive in Maastricht, the most Catholic city in the Netherlands, and our home for the next few evenings. Dinner is served at our hotel. (B, D)

DAY 7: MAASTRICHT: VISIT OF TOWN & LEISURE TIME
Maastricht is the country’s oldest fortified city, founded by the Romans about 50 B.C. Its name is derived from the Latin, Mosae Trajectum, meaning “site where the Maas could be crossed”. We begin with a tour of the city. This charming city has a famous church of Our Lady where there is always a stream of worshippers. Here we will celebrate Mass. The remainder of the day is at leisure. Dinner is on our own this evening. (B)

DAY 8: MAASTRICHT: EXCURSION TO THE AMERICAN CEMETERY, AACHEN & BENEDICTINE ABBEY
We begin our day with a visit to the American Military Cemetery in the village of Henri-Chapelle. The 57 acre cemetery commemorates the 7,989 American soldiers who fell during the advance of the 1st US Army in the Ardennes in September 1944, in Holland, in the push to Aix-la-Chapelle, and during the Battle of the Bulge. The Memorial of the cemetery consists of the chapel and visitors’ building, which are connected by pillars engraved with the names of 450 unidentified or missing soldiers.
We continue on to Aachen, the westernmost German city at the intersection of Belgium, Germany and the Netherlands, and historically one of the most important cities of Europe. Aachen became a popular place of pilgrimage in the 13th century when the Palace Chapel (Pfalzkapelle) took possession of four major relics: “supposedly the swaddling clothes and loin cloth of Christ; the gown Mary wore on the night of Christ’s birth, and the bloody cloth used to wrap John the Baptist’s severed head.”

These items are contained now in the ornate Shrine of the Virgin in the Cathedral, where we will celebrate Mass. Spanning a period of almost 600 years (from 936 to 1531), some 32 Holy Roman Emperors were crowned in this Cathedral. You might want to take some time to visit Aachen’s famous market, surrounded by medieval houses that have now been converted into restaurants or cafes. En route back to Maastricht, we stop for evening vespers with the monks at the Benedictine Abbey of Abdij Benedictusberg. Dinner is on our own tonight in Maastricht. (B)

DAY 9: MAASTRICHT: EXCURSION TO LIEGE AND BANNEUX
This morning we continue to the city of Liege. In the beautiful twin-towered Romanesque Saint Bartholomew Church you will find one of the most remarkable masterpieces of Liege, the Baptismal font by Renier de Huy, cast in the 12th century. The baptismal font is one of ‘Belgium’s Magnificent Seven’- the title given to the country’s 7 most important historical treasures. This is the most splendid example of a Western tradition of baptismal font-sculpting. Renier’s baptismal font combines the Mosan tradition with Byzantine and Roman elements. This bronze font rests on 10 (originally 12) oxen symbolizing the 12 apostles and several baptism scenes are depicted on the sides.

We then continue to Banneux. Banneux was the site of eight apparitions of Our Lady under the title of Our Lady of the Poor in 1934. She appeared to young Mariette Beco, the eldest child in a family of then-seven children. We will visit its healing waters and celebrate Mass at this, the most beloved of Belgium’s Marian shrines. Departing Banneux, we make our way back to Maastricht for dinner at our hotel. (B, D)

DAY 10: MAASTRICHT / LOUVAIN / BRUSSELS / GHENT / BRUGES
Blessed Damien of Molokai served as a missionary to Hawaii, and he devoted his life to those people stricken with the disease of leprosy, which he, himself, contracted. Few people know that Father Damien is originally from Belgium. We will visit the town of Louvain, where we celebrate Mass in the church bearing his tomb.
We depart Louvain for lunch on our own in Brussels and then on to Ghent, twin city to Bruges. These two towns helped shape Flemish identity, much the way it still remains to this day. The best place to start our tour of
Ghent is on St. Michael’s Bridge, with a magnificent view of the entire town. We stop at the tower of Saint Niklaaskerk, the parish church of Ghent’s merchants. This early Gothic structure is the main focus of our visit today.

We then continue to one of the most romantic towns in Europe. Bruges is a fairytale mixture of gabled houses, meandering canals, narrow cobblestone streets, a busy market square, and a populace intent on providing a gracious and warm welcome to its visitors. Dinner is at our hotel tonight. (B, D)

DAY 11: BRUGES: VISIT OF THE TOWN
We begin our day with Mass and a visit to the Basilica of the Holy Blood. Since 1149, this Basilica has been a repository of a fragment of cloth soaked with the blood of Christ, which was brought to Bruges during the Second Crusade by the Count of Flanders. Every Ascension Day, a colorful Procession of the Holy Blood displays the relic through Bruges’ streets, accompanied by costumed residents acting out biblical scenes. This remains one of Europe’s most magical medieval pageants.

Our visit also includes the Church of Our Lady, housing Michelangelo’s statue of the Madonna and Child, the Pieta. This town is famous for its lace, and our visit will conclude with a visit to view the locals at their crafts. Of course, no visit to Bruges would be complete without a boat ride on the city’s canals. Dinner is on our own tonight. (B)

DAY 12: BRUGES: EXCURSION TO IEPER & OPTIONAL ANTWERP
This morning we visit the Flanders Fields Museum at Ieper, a small town south of Bruges, where half a million people died during World War I. The museum uses audio-visual technologies and vintage photos to tell the story of the role Ieper played in the Great War. In 1919 Winston Churchill said “a more sacred place for the British race does not exist in the world” about Ieper. This is truly a moving experience.

This afternoon is at leisure in Bruges. Those wishing to, may make an excursion to the city of Antwerp, Belgium’s second largest city and Europe’s second largest harbor. Above all, it is the city of RUBENS, the world-famous painter of the 17th century. We visit the Cathedral of Our Lady, which houses three famous paintings by Rubens: ‘Elevation of the Cross, Assumption, and Deposition’. We then return to Bruges for Mass at a local church and our farewell dinner at a local restaurant. (B, D)

DAY 13: RETURN TO USA
We transfer to the Brussels airport for our return flight to the USA. (B)