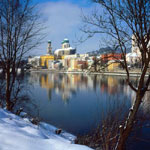 Upon arrival in Munich we will be met by our English speaking guide and board our waiting motor coach to transfer to the charming city of Regensburg, about ninety minutes away. Dinner is served at our hotel tonight. (D)

DAY 3: REGENSBURG: VISIT OF THE CITY / EXCURSION TO PASSAU

Today, after we celebrate the opening Mass of our pilgrimage, we have a city tour of Regensburg. A university town with first-rate breweries, Regensburg brims with good cheer. Visitors from Charlemagne to Mozart and Goethe have been struck by its felicitous position on the Danube River. Our visit includes the cathedral, the finest gothic church in south Germany, and the Altes Rathaus, the center of medieval Regensburg. Pope Benedict XVI was Professor of Theology at the University of Regensburg and also served as Vice President of the university.
We then continue our journey with a visit to Passau, the “Bavarian Venice”, beautifully situated at the confluence of the Danube, Ilz and Inn rivers. In 1662 a fire reduced the town to rubble, and the Baroque town we visit today was built by Italian architects. We begin our visit at the magnificent St. Steven’s Cathedral containing the world’s largest church organ (17,774 organ pipes, 233 stops and 4 carillons). Our visit will also include the Museum of the Treasure of the Cathedral, which shows the treasures of Passau’s past when it was the capital of the largest diocese of the Holy Roman Empire. We also visit the Church of the Covent of Niedernburg. We return to Regensburg for dinner at our hotel and overnight. (B, D)

This morning we depart Regensburg and our motor coach will take us amidst green meadows and snowcapped mountains to the heart of Bavaria, Altotting. We visit one of Germany’s most celebrated shrines – Our Lady of Altotting. Here we celebrate Mass. The Shrine of Black Madonna of Altotting has for centuries served among Germany’s most beloved devotions to Mary, the Mother of Jesus.

The Shrine of Our Lady of Altotting has been mentioned in Europe side-by-side with other great places of pilgrimage – such as Lourdes, Fatima and Czestochowa. The ongoing miracles are manifested by countless conversions and a return to renewed faith of the pilgrims. Over 2000 votive paintings, that cover the outside walls of the chapel, speak of the trust in the intercessions of the Black Madonna of Altotting.

In November 1980, Pope John Paul II visited the Shrine. We take some time to visit the ‘miraculous’ statue of our Lady in the Chapel of Mercy, then take some time for our own personal reflections. After lunch on our own and some free time, we continue to Marktl, the birthpace of Pope Benedict XVI. We then continue to Munich. Dinner is at our hotel tonight. (B, D)

DAY 5: MUNICH: VISIT OF THE CITY

We begin our day with Mass at the Baroque church of Asamkirche. We continue as we make our way just outside of Munich to visit the Nymphenburg Palace, summer home of the Bavarian monarchs, complete with its magnificent gardens. After our visit here, we return for a city tour of
Bavaria’s capital, including the historic glockenspiel on the Marienplatz, the revered twin-towered Fraunkirche (Church), the most familiar landmark of old Munich, and more. The remainder of the day is at leisure to explore on our own. Tonight we will enjoy a festive dinner at the famous Hofbrauhaus. (B, D)

This morning we head south of Munich near the Austrian border for the quaint medieval town of Fuessen, where the legendary Neuschwanstein Castle, an architectural masterpiece, idyllically sets atop a precipice among the Bavarian Alps. Neuschwanstein is one of the fairytale castles built by Mad King Ludwig II and was the inspiration for Walt Disney’s Cinderella Castle. With its turrets and mock-medievalism, its interior styles ranging from Byzantine through Romanesque to Gothic, the castle is a real fairy-tale fantasy come true.
We continue to Oberammergau, a beautiful village, known both for hosting the Passion Play and for its beautiful wood carvings. The story of Oberammergau is one of faith and began with a miracle. In the 1600’s, “The Black Plague” swept through Europe, striking down one in every three people and leaving in its wake, misery, panic and death. The people of Oberammergau prayed to be spared, vowing that they would present a play depicting the Life and Passion of Jesus Christ every 10 years. True to their word, the villagers presented their Passion Play in 1634 and have kept their pledge, the routine of plays only having been interrupted by the two World Wars.

Our last stop is Wies. Miraculously preserved in the beautiful setting of an Alpine valley, the Church of Wies, the work of architect Dominikus Zimmermann, is a masterpiece of Bavarian Rococo – exuberant, colorful and joyful. The Chapel is registered as a UNESCO World Heritage Site. Here we celebrate Mass. We return to Munich for dinner at our hotel. (B, D)

This morning we make a visit to the hillside town of Berchtesgaden. East of Berchtesgaden is the little village of Obersalzberg, the site of Hitler’s Berghof (mountain retreat). This ‘Eagle’s Nest’ retreat was built as a teahouse and given to Hitler by his private secretary, Martin Mormann, as a 50th birthday present. The Eagle’s Nest remained unscathed from the bombing of the Allied Forces during WWII. Since 1952 it has been open to the public as a mountain top restaurant with a spectacular view. In clear weather, Salzburg (Austria) can be seen from the retreat. As it would be, Salzburg is our final destination later today.
This afternoon we enjoy a cruise on Lake Konigsee, a thin fjord-like lake that hooks itself around the Watzmann, Germany’s second highest mountain. Lake Konigsee is known throughout the world for its emerald green water and unique mountain landscape. We’ll cruise silently across the lake on electric-powered boats and hear the famed Konigsee echo. We continue on to the peninsula of St. Bartholomew with the unmistakable red onion domes atop its ancient pilgrimage church. We arrive in Salzburg, a splendid city set on the banks of the Salzach River, where we will celebrate Mass. Dinner tonight is at our hotel. (B, D)

DAY 8: SALZBURG: VISIT OF THE CITY

This morning after Mass at the local church, we explore Salzburg, including a walk by Mozart’s Gerbertshaus, the composer’s birthplace, now a museum; and the Glockenspiel Tower and Palace. We explore the religious heritage of this town, including Nonnberg, believed to be the oldest nunnery in existence, founded by St. Rupert in the 8th century, plus the Benedictine Abbey of St. Peter, also founded by St. Rupert. Dinner is at a local restaurant with music from the movie “Sound of Music”. (B, D)

Today we depart for Melk Abbey. The Baroque style structure is surrounded by a gorgeous town with Renaissance homes and winding streets reminiscent of the Middle Ages. The Abbey is the setting for Umberto Eco’s ‘The Name of the Rose’. Among the treasures housed here are paintings, sculptures, and decorative art from the 9th to 15th centuries. A magnificent library contains over 2,000 volumes from that era. A brilliant organ and skeletons dressed in luxurious costumes kept in glass coffins are among the other things to see here. Here we celebrate Mass. We continue to the Austrian countryside en route to Mariazell for the evening and dinner at our hotel. (B, D)

This morning we begin Mass at the Mariazell Basilica, dating to the dawn
of the 14th century. The Chapel of Grace is considered the national shrine of Austria. Miracles are attributed to its statue of the Virgin, giving rise to fame that has spread all over Europe. We then have a tour of the town. After lunch we continue to Vienna with the remainder of the day at leisure. Dinner tonight is at our hotel. (B, D)

We begin our day with Mass at St. Stephen’s Cathedral. We continue with a sightseeing tour of the Imperial city of Vienna. Through the tour we will gain an overall impression of the most significant historical sights of Vienna. We begin at the Hofburg Chapel. Next our local guide will show us the Ringstrabe with its magnificent buildings, such as the State Opera House, the Museum of Fine Arts and the Museum of Natural History, the City Hall, the Hofburg, the Parliament, the University, the impressive Gothic St. Stephen’s Cathedral as well as the Votive Church. We will also see the Giant Wheel at the Prater amusement park and the beautiful Belvedere Palace gardens, and drive by the magnificent Schonbrunn Palace. The remainder of the afternoon is at leisure for a stroll around this magnificent city.
Tonight, a special treat: as the largest wine-growing city, Vienna has also become famous for its excellent local “Heurigen” wine. Get the spirit of this typical Viennese “Heurigen” atmosphere at a local restaurant in the wine growing village of Grinzing, where we will have a festive farewell dinner and a taste of the wine while being entertained by the melancholy “Schrammein music”. (B, D)

We transfer to the Vienna airport for our return flight to the USA. (B)