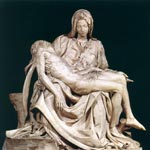 We depart en route to Rome with complimentary meals and beverages served aloft.

We arrive in Rome and are met by our Catholic Travel Centre representative, who will accompany us throughout the tour. We board our motor coach and make our way to the region of Umbria, and the town of Assisi, clinging to the side of Mount Subasio. This town was home to Ss. Francis and Clare. Dinner is at our hotel. (D)

Today we visit this “quiet medieval town, imbued with the mystical spirit of one of the most fascinating characters of history.” We begin with Mass at the Tomb of St. Francis. After Mass we enjoy a tour of the Basilica of St. Francis, led by one of the Franciscan monks. We continue with a walking tour of the city, visiting the major sites associated with St. Francis, including the Chiesa Nuova, built over the home of Francis’ family and the Church of San Rufino, with the baptismal font of the Saint and Santa Chiara Church (home to the San Damiano Cross).
This afternoon is at our leisure in Assisi. You might like to take a taxi on your own up to the Hermitage where St. Francis often retired to pray. Or you may wish to do some shopping in the many quaint shops that line the streets of the tiny, medieval town. Dinner is served at a local restaurant tonight (B, D)

This morning we visit the Basilica of St. Mary of the Angels. Here we view the Porziuncola, the tiny church inside the Basilica. Nearby is the place that Francis surrendered to ‘Sister Death’. After Mass, we make our way to Siena. The main square of this medieval town is absolutely charming, and we will have some time to enjoy the atmosphere of this medieval town and to enjoy lunch on our own. We then continue on our way to Florence. Florence is known as the city of the Medici Family and Machiavelli. This will be our home for the next three evenings. Dinner is served at our hotel. (B, D)

DAY 5: FLORENCE: VISIT OF THE CITY

We awake in the city known as the ‘Jewel of the Renaissance.’ Our morning sightseeing tour begins at the Cathedral (Duomo, in Italian) also known as the Basilica of Santa Maria in Fiore. We see also the nearby Baptistery of San Giovanni, whose stunningly sculptured bronze doors by Ghilberti moved Michelangelo to compare them the doors to the ‘Gates of Paradise. Our final visit of the tour is the Franciscan Church of Santa Croce, housing the tombs of Michelangelo and Dante among other famous figures. Here we celebrate Mass.
We have some free time this afternoon to explore the city. Art enthusiasts will want to visit the famous Uffizi Gallery or Pitti Palace for their world-renowned collections. Others may wish to stroll and browse along the Ponte Vecchio (Old Bridge – the only bridge to survive the Nazi bombings of World War II). Or perhaps you may wish to do a little shopping at the outdoor San Lorenzo Market. Dinner is on our own this evening. (B)

After a hearty Florentine breakfast, our focus for the morning becomes the masterworks of Fra Angelico in the Convent of San Marco. Originally named Guido di Pietro, Angelico entered the Domincan friary in Fiesole in 1418 and took on the name Giovanni da Fiesole. He eventually came to be known as Fra (short for frater, or brother) Angelico – because he painted like an angel.

Giorgio Vasari, the 16th century biographer, wrote of this Dominican’s inspiring holiness, claiming him among the most devout of the Renaissance painters. Fra Angelico lived in his cell, under the vow of poverty, and turned all commissions from his outside works over to the order. He never lifted his brush without whispering a prayer, and his pious devotion is evident in the work we will see today.

After our visit here, we continue to the Academy of Fine Arts where we marvel at Michelangelo’s stunning statue of David. The afternoon is at leisure, and dinner is on our own to explore the local restaurant scene. (B)

OPTIONAL VISIT TO VENICE
Note: For the adventurous souls in the group, if you opt out of this morning’s tour of the San Marco Monastery and the Academy, then the entire day is at your leisure, in which case you might opt to take a train on your own to Venice, the City of Canals. The high-speed Inter-City train departs Florence in the morning and will take you to Venice, where you can tour the city on your own. Your local tour escort will help you in arranging this trip.

We depart Florence for the charming hilltop town of Orvieto. The town sits on a 1,000-foot high rock formation, poetically crowned by Italy’s most renowned Gothic cathedral. Because of its strategic location, Orvieto for centuries served as a refuge for the popes in troubled times. But Orvieto’s claim to fame is really much more significant:

We enjoy a wine tasting and then continue to Rome for some leisure time. Dinner is at our hotel. (B, D)

This morning we visit the Basilica of St. Peter housing the Tomb of St. Peter. Here we celebrate Mass. We continue with a tour of the Vatican Museum, where our visit is highlighted by the Sistine Chapel, featuring Michelangelo’s masterworks. We will then visit the Basilica of St. Peter with our local guide. We will see Michelangelo’s famous statue of the Blessed Mother holding her crucified Son. We know it as The Pieta. Later we have a guided visit and tour of the Scavi, the underground excavations beneath St. Peter’s Basilica (these tickets are always subject to final confirmation 48 hours before the proposed visit). Dinner is served at our hotel this evening. (B, D)

This morning, after breakfast, we visit the Basilica of San Clemente. The Basilica presents a unique opportunity to experience three levels of history: below street level we find the remains of ancient Roman buildings, including a Temple of Mithras, a male fertility cult that rivaled Christianity during the time of Imperial Rome. The second layer of the edifice contains a 4th century church. And at street level we encounter a 12th century church. The Basilica is named after Clement, the fourth pope, who was martyred by being tied to an anchor and drowned. Some of the frescoes in the church tell the story of his life.

Later, we enjoy a panoramic tour of some of the sites of Ancient Rome, including the Forum and Coliseum (entrance included). Its real name was the Flavian Amphitheatre, after the emperors who built it in the first century after Christ. Coliseum refers to the ‘colossal’ statue of Nero that at one time stood at the entrance.

We celebrate Mass at Ss. Cosmas and Damian Church, named after two brothers who were martyred in northern Syria during the third century. In 527, Pope St. Felix IV converted two buildings in the Roman Forum into this Christian church, the first time this had been done. The balance of the day is at leisure. Dinner is on our own this evening. (B)

This morning we transfer to the Pope Paul VI Audience Hall for the Papal Audience (subject to Holy Father’s schedule). After the Audience, we will have some time at leisure.

This afternoon, our guide will lead us on a walking tour of Rome, starting at the Trevi Fountain, where we toss our traditional three coins. From here we continue to the Piazza Trinita dei Monti at the top of the Spanish Steps, affording a romantic panoramic view of the city of Rome. Our tour continues across the city to the Pantheon and we finish our day at the Piazza Navona. You may wish to visit some of the ice cream shops serving the Italian gelato! Dinner is on our own this evening. (B)

This morning we make our way to the Basilica of St. Paul’s Outside the Walls, housing the Tomb of St. Paul the Apostle, affectionately known as the Apostle of the Gentiles. We then proceed to the Catacombs of St. Calixtus, the underground burial site of the early Christians. Many of the early Popes are entombed here. We return to Rome for the afternoon at leisure. Tonight we gather for a festive farewell dinner. (B, D)

This morning we transfer to the Rome airport for our return flight to the USA. (B)