Venues for Your Choir:

We depart en route to Rome with complimentary meals and beverages served aloft.

Upon arrival in Milan, we are met by our Catholic Travel Centre representative, who will accompany us throughout our tour.  We make our way to Milan for a panoramic sightseeing tour of the city, including a stop at the Milan Cathedral.  After some time for lunch on our own, we board our motor coach en route to Venice-Mestre for dinner and the evening. (D)

Today we enjoy our visit of Venice, known as ‘The Queen of the Adriatic’.  “A unique position, the grace of her buildings, the changing colors, make Venice the most charming and poetic city in the world.” 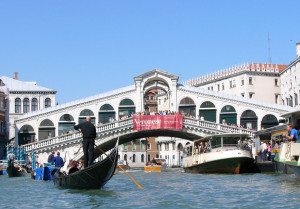 Our visit begins at the Basilica of St. Mark–golden mosaics from the Second Golden Age of Icons adorn this magnificent Byzantine basilica built to honor the body of St. Mark brought from Alexandria in Egypt.  Popes John XXIII and John Paul I were Patriarchs of Venice.  Next, we visit the Piazza di San Marco and the Palazzo Ducale (the palace of the Doge, the political leader of the Republic of Venice).

We have some time at leisure before we gather to rehearse for tomorrow’s liturgy at the Basilica of St. Mark. Dinner this evening is at our hotel.  (B, D)

We have some time at leisure this morning to absorb the romance of Venice.  Then, the Choir of Stella Maris Catholic Church will sing the noon liturgy at the Basilica of St. Mark!   After Mass and, we gather up and board our motor launch, which whisks us to our waiting motor coach as we make our way to Padua.

Padua: the city claims to be Italy’s oldest commune in the north, built on the banks of the Bacchiglione River whose branches at one time surrounded the town. We know Padua for several reasons—one as the setting for much of Shakespeare’s The Taming of the Shrew and, also, as the final resting place of St. Anthony of Padua, to whom many of us may have prayed over the years for intercession in finding our lost articles.

We visit the Basilica of St. Anthony, built on the site of the Saint’s tomb. With seven cupolas, the church stands prominently against the Paduan skyline.  Back on our coach, we make our way to Florence for dinner and the evening.  (B, D)

Florence’s recorded history began in 59 BC when Julius Caesar allocated the Arno valley to his veterans.  They built an army camp, named Florentia, in a chessboard pattern that can still be found in the city center.  Situated on a main trade route the settlement expanded rapidly, and in the 3rd Century AD, the Emperor Diocletianus made Florentia capital of the province of Tuscia.  Florence today is a sublime blend of beauty, culture and history. 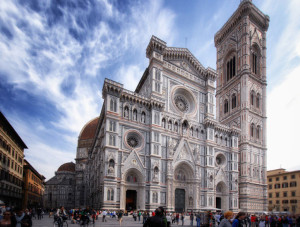 Today we visit the ‘Flower of the Renaissance’, the city of the Medici Family and Machievelli.  We begin our tour at the Piazza del Duomo and the delicately patterned green, white and pink Cathedral of Santa Maria Del Fiore crowned with its magnificent Dome by Brunelleschi and  the Romanesque Baptistery of St. John with the exquisite bronze doors by Ghiberti (which Michelangelo called ‘the Gates of Paradise.’)   We visit as well the Ponte Vecchio, the only bridge to survive the bombings of World War II. 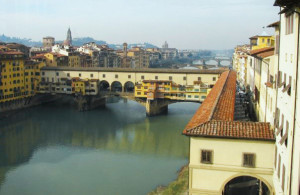 This afternoon we have some time at leisure.  Florence is known for its fine leather and gold shops.  Those wishing to immerse themselves in the local markets will of course want to visit the famous San Lorenzo Market.  Others may wish to visit the Church of Santa Croce. This edifice’s facade is arguably the most attractive among the Florentine churches. It has been referred to as a ‘Tuscan Westminster Abbey’ because of all the famous persons who have found repose here, including Michelangelo, Machiavelli, Dante, and Rossini.  Dinner this evening is on our own to explore the local restaurant scene.  (B)

This morning we visit the Galleria dell’Accademia. This gallery houses paintings by Florentine artists spanning 13th to 16th centuries, but its main draw is Michelangelo’s David, carved from a single block of marble when the artist was only 29. The marble from which Michelangelo carved David was rejected by other artists because of numerous veins that ran through the stone, causing the danger of fracture.

Recognizing the importance of the completed work, a commission that included Leonardo di Vinci, Botticelli and others decided to place the Statue of David just outside the front door of the Palazzo Vecchio, where it soon became a symbol of the city.

This afternoon we make our way to Rome and the Catacombs of St. Calixtus housing many of the tombs of the early Popes and martyrs.  Called by Pope John XXIII “the sublimest and most famous in Rome”, these underground burial places for 16 popes, a large number of martyrs and a great many Christians, contain an intricate network of passages and chambers hewn from the soft Roman tufa. 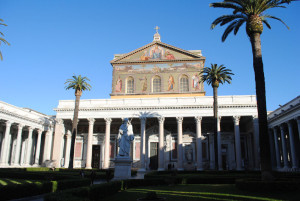 We visit the Basilica of St. Paul’s Outside the Walls, housing the Tomb of St. Paul the Apostle, affectionately known as the Apostle of the Gentiles.  Although heavily restored, the present basilica looks much the same as it did in the 4th century.  After our tour, we transfer to our hotel for check-in and dinner and the evening. (B, D)

This afternoon, our tour escort will lead us on a walking tour of the historic central Rome, including: the Piazza Navona, with its beautiful fountains; the Pantheon, originally built to honor all the gods of Ancient Rome; the Basilica of Santa Maria Sopra Minerva, housing the tomb of the St. Catherine of Siena; and the Trevi Fountain, where we toss our  traditional three coins into the fountain to make our three wishes -one for love, one for money, and one to return to Rome!. 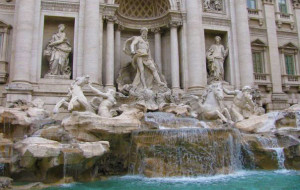 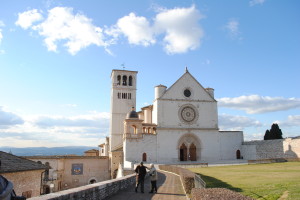 We begin with Mass at the Basilica constructed over St. Francis’ tomb.  The Basilica has an upper and lower church.  The churches have been decorated by the greatest late medieval Roman, Umbrian and Tuscan artists of their time, giving these churches an unequaled importance in the development of Italian art.  After Mass, we enjoy a light lunch at a local restaurant.

After some time on our own in the upper town, we visit in the town below.   We focus on the Basilica of St. Mary of the Angels, containing the Porziuncola, built by St. Francis and his followers. The Porziuncola is a tiny church constructed within the Basilica, like a ship in a giant bottle.  Nearby marks the spot where Francis surrendered to ‘Sister Death.’  We return to Rome for the evening.  Dinner tonight is on our own.  For those of us who wish to dine as a group, our tour escort will have some suggestions.    (B, L)

This morning we begin with a tour of the Basilica of St. Mary Major, followed by Mass. After Mass we will visit the Basilica of St. John Lateran.   It is here that St. Francis persuaded Pope Innocent III to give permission to begin the Franciscan Order.  The night before the Pope had seen a man in a dream and the man was supporting the tottering building of St. John Lateran.  The next day, when Francis appeared before Pope Innocent, His Holiness recognized the face from the dream and consented to Francis’s request. 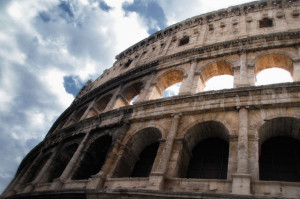 This afternoon, we enjoy a tour of some of the sites of Ancient Rome, including the Forum and Coliseum.  We begin with a visit to the Roman Forum, located in a valley between Palatine Hill and Capitoline Hill. It originally was a marsh, but the Romans drained the area and turned it into a center of political and social activity.   When the Roman Empire fell, the Forum became forgotten, was buried and used as a cattle pasture during the Middle Ages.

It’s not hard to imagine, as we stroll through the valley, people thronging the Forum stopping to listen  to senators at the Imperial Rostra, where Mark Antony eulogized Julius Caesar, then wandering away to do their shopping, and perhaps leave a gift at a temple for one of their gods.

Next, we walk the short distance to the Coliseum.  (Its real name was the Flavian Amphitheatre, after the emperors who built it in the first century A.D) Coliseum refers to the ‘colossal’ statue of Nero that at one time stood at the entrance.) Originally on this spot stood a pool, around which was built Emperor Nero’s famous ‘Golden House.’  The construction was completed with the help of Jewish slaves brought here in 70 AD.  The Coliseum served as the center for violent sports.

This evening we offer an evening concert at a local church in Rome, followed by dinner at a local restaurant.  (B, D)

We enjoy a tour of the Basilica of St. Peter’s where we enjoy a guided tour of the Basilica which houses the Tomb of St. Peter. Here we will see Michelangelo’s famous statue of the Blessed Mother holding her crucified Son. We know it as The Pieta.  We will also pause to pray at the tomb of Blessed Pope John Paul II.  We will have time to visit the excellent religious article shops in the area.  Lunch is on our own. 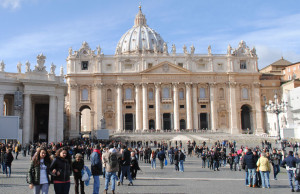 Some may wish to do some shopping this afternoon.  For those interested, you might wish to enjoy an optional tour of the Vatican Museums and Sistine Chapel. , we visit the Vatican Museums, whose treasures include the ancient Rome exhibits with the famous Laocoon statue, and the High Renaissance murals of Raphael, which he was painting at the same time Michelangelo completed the Sistine, another marvel.  The restoration of its frescoes reveals startling bright colors – a new light on Michelangelo!  The Sistine was commissioned by Pope Sixtus IV to mark the Holy Year 1475.  Tonight we gather for a special farewell dinner at a local restaurant.   (B, D)

Breakfast is included today, afterwards we bid farewell to Italy as we transfer to the Rome airport to begin our journey home.  (B)

Customized Itineraries: The itinerary shown here is one example of how you might plan your Choir tour. Catholic Travel Centre specializes in customized tours, so we can willingly add days or sites.

Pricing: Our Catholic Travel Centre Choir specialists will custom quote your itinerary depending upon your dates of travel, group size, class of hotels, etc. Call us toll free at (800) 553-5233.